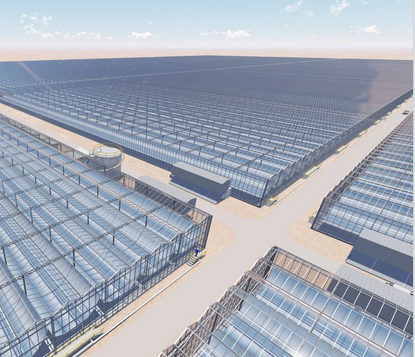 Solar enhanced oil recovery (EOR) could become a major market for CSP as oil producers are looking for ways to reduce their carbon footprints and to save production costs and natural resources, Rod MacGregor, President and CEO of GlassPoint, developer of Miraah, told CSP Today.

“Oil and gas is the next big thing for solar. Oil fields consume gigawatts of energy and in heavy oil production about 20% of the barrels of heavy oil produced are consumed just making it,” MacGregor said.

The Miraah plant is being developed by GlassPoint Solar and Petroleum Development Oman (PDO), the largest oil and gas producer in Oman.

The solar thermal facility will produce steam at the Amal oilfield in South Oman.
The facility will be more than twice the capacity of the largest CSP plant currently in operation, BrightSource's 392 MW Ivanpah plant in California.

Construction of Miraah will start this year and the first steam generation is expected in 2017.

GlassPoint and PDO have worked together since 2010 on a successful 7 MW pilot project at Amal and a proven track record of this plant has led to the huge Miraah project.

“PDO awarded GlassPoint the contract based on the strength of our successful solar steam pilot, which has exceeded expectations for reliable operations and steam delivery for the past two years,” Raoul Restucci, Managing Director of PDO said at the event announcing the partnership on July 8.

Image: The pilot project in action at PDO's site

Once complete, Miraah will save 5.6 trillion British Thermal Units (BTUs) of natural gas each year, allowing gas to be used for power generation elsewhere in the country and displacing diesel and oil burning in future energy projects. The CSP plant can save up to 80% of gas consumption on an oilfield, the project partners said.

The leading method of producing heavy oil is steam flooding, a thermal EOR process that injects steam into a reservoir to heat the oil and reduce viscosity, making it easier to extract and pump to the surface.

Steam for thermal EOR is typically produced by burning large volumes of natural gas.
However economic growth in Oman will increase demand for gas-fired power generation and national oil reserves are expected to last only two more decades unless production yields are improved.

An alternative is to generate steam for the oilfields using concentrated solar energy. GlassPoint’s approach has been to develop a standard glasshouse block, generating 28 thermal MW of steam at peak output, and a standard process configuration for deployment of its technology.

GlassPoint's solar EOR solution will generate an average of 6,000 t/d of solar steam for oil production, meeting a sizable portion of the field’s steam demand. At night natural gas will continue to be used to generate steam.

The full-scale project will comprise 36 glasshouse modules, built and commissioned in succession in groups of four.
A self-cleaning glasshouse encloses and protects the solar collectors from wind, sand and dust storms common in Oman and throughout the Gulf region. The total project area, including all supporting infrastructure, will span three-square kilometres. The actual solar field will span less than two-square kilometres.

“The use of solar for oil recovery is a long-term strategic solution to develop PDO’s viscous oil portfolio and reduce consumption of valuable natural gas, which is needed elsewhere to diversify Oman’s economy and create economic growth,” Restucci said.

The conditions required for these solar EOR projects are similar to those any solar plant: they need a lot of direct sunlight. As the largest oil fields in the world are in areas rich in sunlight, the conditions are perfect for solar EOR to take off in the oil industry.

According to a 2014 roadmap from the International Energy Agency, solar thermal electricity (STE) from concentrating solar power (CSP) plants could generate 11% of the world’s electricity by 2050.

And if the wider oil industry sees the opportunity in producing energy using the sun’s heat, CSP’s penetration could be even deeper.