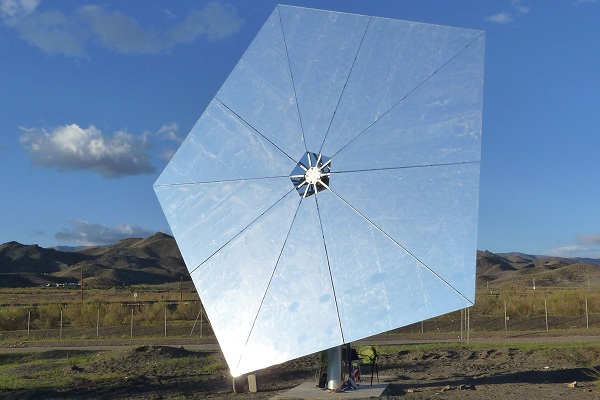 Heliostat fields typically contribute about 50% of the capital investment for CSP tower plants, according to a study by SBP Sonne, the German engineering firm which has developed the Stellio heliostat design.

Solar power towers are set to play an increasingly dominant role in the CSP landscape. Some 487 MW of CSP tower capacity is under construction, accounting for 44% of the global CSP capacity being built, according to data available on the CSP Today Global Tracker.

A further 575 MW of tower capacity is under development, representing 36% of projects, the data shows.

SBP Sonne estimates a solar field cost of 100 euros per square meter will be achievable with Stellio, and an LCOE reduction of around 20% compared with today’s most competitive heliostat designs. Some 15% of this cost reduction would come from the lower heliostat cost and 5% would come from the smaller reflective area required due to higher efficiency.

“For this comparison, a holistic assessment was undertaken using today's most widely used heliostat as benchmark. A large power tower plant was modelled, using weather data for South Africa, and cost data from literature and based on our own experience were used,” Markus Balz, Managing Director at SBP Sonne, told CSP Today.

“We found an LCOE for a 100 MW power tower using Stellios in Upington, South Africa, of $144/MWh,” Balz said, although he warned the LCOE would greatly depend on factors such as irradiation levels, costs for other plant components and project development, as well as interest rates and depreciation times.

For each heliostat type modelled, the power plant was optimized, including receiver dimensions, tower height, and field layout. LCOEs were then determined for the individual cases.

Balz also said the technology is ready for commercialization.

“Our consortium has already offered it as a turn-key solar-field solution for a large project in South Africa, which we will disclose soon,” he said.

As higher capacity CSP plants are built, these units are using a larger number of heliostats.

“Large plants have expansive solar fields with a high number of heliostats and a greater distance between them and the central receiver. This results in more optical losses, atmospheric absorption and angular deviation due to mirror and sun-tracking imperfections,” according to a 2013 CSP technology brief by IEA-ESPA and IRENA.

More heliostats also means higher installation costs, which when combined with optical losses, adds to the levelized cost of electricity (LCOE). SBP Sonne studied ways of minimizing the LCOE from tower plants by analyzing all existing heliostat technologies and their costs.

The investigation led to the development of the Stellio heliostat, which was initially designed in collaboration with SASOL, the South African energy and chemical group.
After SASOL withdrew from the project, SBP partnered with Spanish firms Masermic, a manufacturer of electronic equipment for solar tracking control and premium automobiles, and Ingemetal Solar, a specialist in fabrication, assembly and erection of parabolic trough collectors.

The Stellio has a pentagonal (roundish) shape, rather than a rectangular design, which allows for dense heliostat fields with little shading and blocking, and reduced atmospheric attenuation, Balz said.

Each heliostat has its own individual ‘DNA,’ which is a set of information describing its specific properties. Smart control software allows the system to continuously gather data and the heliostat’s DNA can be updated.

“Stellio closes a gap in the CSP field by introducing a medium-size heliostat with a cost-effective design and a very good optical quality for a wide range of applications,” Steffen Ulmer, a mechanical engineer and co-founder of CSP Services, told CSP Today.

“It comes up with a novel shape (pentagonal) which allows the reduction of shading and blocking effects in the solar field while using cost-efficient cuts from standard glass dimensions,” Ulmer said.
The entire design, including the actuators, fulfills the objective of lower cost per square meter of installed reflector area without any compromise on technical performance, he said.

The design also avoids large structural deformations at the reflector corners, common in current heliostat designs, due to an equal-stiffness symmetric structure. All the ‘arms’ that support mirror elements are radially arranged and essentially equal. The loads such as wind and system weight are directly transferred from all mirror elements to the central hub and pylon.

Precise canting is achieved during assembly, and the system avoids drive backlash effects as the linear actuators are under tensile load during typical operation conditions.

The cost of local controller and motor drivers is also reduced by using a design based on automotive technology.

The construction of the Stellio can take place near a CSP plant site, meeting national local content criteria. The flat mirror panes and linear actuators are non-specific to the Stellio design and the steel structure almost completely consists of sub-assemblies that can be manufactured anywhere under the technology developer's quality control guidance.