Every country has a different combination of incentives to develop PV. These can be both natural - like South Africa’s perfect insolation - and legislative. Here’s what makes South Africa an attractive market for solar developers. 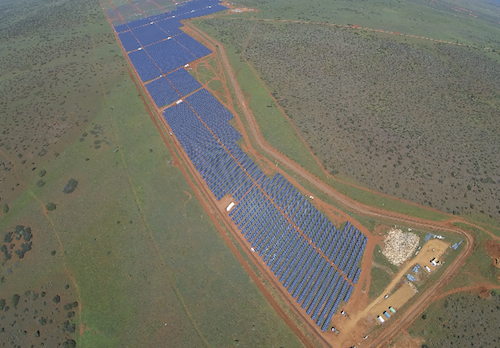 At 75MW each, the Lesedi and Lesatsi pair of projects awarded in Round One,...

While South Africa has been relatively late to the development of renewables, it is making spectacular progress, with a target to produce 17.8GW of renewable energy by 2030, and a well thought out policy to get to the goal - that has unleashed exponential growth in solar. More than 3.9GW of projects have been awarded, and 2.4GW of that is already in operation or construction.

A combination of factors unique to the country explain its fast transition, and why, for well organised solar developers, South Africa is the land of opportunity.

South Africa, unlike many nations in the developed world, has significant demand for new power generation. The state-owned utility Escom, primarily fuelled by coal is not able to reliably meet the current load, and recently, the economy has grown faster than predicted. The state-operated utility which is responsible for maintaining a balance of supply and demand - has become more unable to supply it reliably.

Blackouts in 2008 were attributed to a combination of factors including, poor transmission maintenance, and unanticipated increase in demand while simultaneously running out of its formerly cheap high quality coal supplies. Eskom to date has relied on coal-fired generation.

“Planning both through the Green Economy Accord, and as well as the National Development Plan, endorsed by the entire cabinet, clearly stipulates a path towards a low carbon economy,” says Davin Chown, Director of Corporate Affairs and Business Development at South Africa’s Mainstream Renewable Energy.

“That whole change is now well cemented in government policy. Within this policy framework, you now very clearly have a set of renewable energy targets, which are all set in place.”

Getting permits in South Africa is easier than in the US, with solar insiders suggesting that it is about a third of the cost - of permitting in the average US state. As in many of the developing markets internationally, permitting PV in the wide open spaces of the South African wilderness is a simpler process. This is not to say that it is not extremely rigorous, however.

“In the South African bid structure, when you bid a project to the government; you have to have a fully financed and fully permitted project in order to bid, to have a chance to get awarded. It's a good programme,” says Smith. “It's probably one of the top programmes in the world as far as being well structured.”

SolarReserve has made substantial inroads in South Africa, with a development pipeline of five or six PV projects in addition to its first three solar projects, totalling 246MW, that are among the largest PV installations to date in South Africa.

At 75MW each, the Lesedi and Lesatsi pair of projects awarded in Round One, also represented the largest project finance transaction ever completed in South Africa at $586m. The $260m 96MW Jasper project was awarded in Round Two, and is now nearing completion and awaiting interconnections for shipping power by December 2014.

Financial ducks in a row

The firm’s experience was that the South African process efficiently weeds out speculative developers, enabling straightforward steps to meet the goals.

“As far as we're concerned it's the model for other markets to look at,” says Smith. “It is transparent. It requires firms to actually have projects permitted and land secured and the financing structure in place before you can bid it, so there is a high success rate of projects that are awarded versus projects built.”

“It’s very tough,” Chown agrees. “It’s very thorough and it’s not easy to get through. You have to meet a number of compliance hurdles, and once you do that, you make the grade and you are selected to perform projects. It’s a tough process to work through; extremely onerous and demanding.”

“You have to have the committed equity, including board approval from your equity suppliers, and then you have to have a credit committee debt structure,” says Smith. “When we submitted our bid into the government we had a fully financed structure. Not that it had closed financing as yet, but we had to have full commitments for 100% of the financing - in fact, we were oversubscribed on the financing.”

From years of energy development internationally; building projects in 15 different countries, Smith has found that bringing on local partners is the best way to get comfortable with the various international markets. He recommends attending local conferences as a good way to find that expertise.

“We hired our first employee from Eskom, the South African state-owned utility. We met him through conferences,” he relates.

“You end up meeting the engineering firms, the law firms and finance companies and other companies down there through the various programmes and conferences. Really just from seeking out expertise in countries, increasing our knowledge of the market, we identified the players who had some expertise in various aspects of the market,” he says.

Between the insolation, the increasing electricity demand, the stable policy and the superior bidding process - for expert solar project developers, South Africa truly looks like the ideal market.