ABB has developed and tested alongside wire and cable specialists, Borealis and Borouge, a 525 kilovolt (kV) extruded high-voltage direct current (HVDC) cable system. The new initiative claims will more than double the power capacity to about 2,600 MW from 1,000 MW. 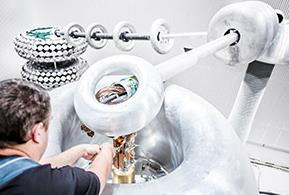 Ulrich Spiesshofer, CEO of ABB says that the technology breakthrough will...

ABB describes the new offering as the most powerful underground and subsea power transmission cable system ever.

Ulrich Spiesshofer, CEO of ABB says that the technology breakthrough will change the feasibility of renewable energy projects, such as solar and offshore wind. It would pave way for savings in capital and operational expenses. Plus, it also supports the development of DC grids where ABB removed a key technology hurdle with the development of the hybrid HVDC breaker.

ABB highlights that its system would pave the way for more power over greater distances with reduced losses. Its new 525 kV cable technology would integrate more renewable energy being generated by distant solar and wind installations.

Citing an example, it mentioned that a single pair of 525 kV extruded HVDC cables could transmit enough power from, for example, giant offshore wind farms in to supply two million households. The 525kV cable system can be deployed in subsea and underground applications, making it ideal for efficient power delivery through densely populated or environmentally sensitive areas or coastal and open-sea applications.

Utility scale solar projects could potentially take advantage of underground and even subsea transmission at this scale in Europe, North and South American territories, Africa and Asia.

According to ABB, its new initiative will more than double the power capacity to about 2,600 MW from 1,000 MW. It will also expand the cable’s reach to distances of 1,500km , up from less than 1,000km , while keeping transmission losses under 5%.

The new cable offers a 64% increase over 320 kV, currently the highest voltage deployed for this type of technology, stated ABB.

This recently developed and 'next generation' HVDC insulation compound, Borlink LS4258DCE, which, along with the accompanying HVDC semicon Borlink LE0550DC, enables the use of extruded cable technology at significantly higher voltage and transmission levels in instances where paper cables are traditionally used.

Successful type test qualification of an extruded cable system according to the Cigré recommendation 496 has been achieved at 525 kV based on Borlink LS4258DCE and Borlink LE0550DC. This performance indicator is made possible, claims Borealis and Borouge, by the “unique character of the compound providing a high level of both chemical and physical cleanliness to achieve the envisioned step-change in electrical performance.”

Borlink LS4258DCE is an unfilled crosslinked polyethylene (XLPE) compound based on the enhanced base resin technology Supercure. The compound is designed to provide higher cable production efficiency in terms of a shortened cable production cycle, enabled by a significant reduction of degassing burden and improved scorch performance. It is produced at Borealis’ production facilities in Stenungsund, Sweden, a plant recently supported by major investments.

One of the aspects most beneficial for solar industry plant operators is the fact that the Borlink LS4258DCE will provide technical benefits as well as more efficient and more streamlined means of production. This new grade enables the use of extruded cable technology to produce extra high voltage cables necessary for increased and more efficient transmission capacity.

This allows transmission over longer distances and grid integration of remote renewable energy generation. Utilities will be able to benefit from this more efficient use of energy, leading to higher sustainability.

Arguably, an increased number of cables installed underground leads to fewer unsightly overhead lines, contributing to high reliability and contributes to ensuring no risk to human health. Also, making it possible for countries to trade energy by way of interconnectors also promotes energy efficiency and reliability at economic prices, argues ABB and Borealis and Borouge.

Markets, such as Indonesia, which will increasingly over time turn to more grid-based solar power across its 922 permanently inhabited islands, could see a vast change in its acceptance of solar power, if it was grid connected on a mass scale.

The Indonesian (or Malay) Archipelago is often referred to as the largest archipelago on Earth, but refers to the area and not by number of islands. This title aptly represents its 17,508 - 18,306 or so islands which span 5,400 kilometres (3,400 mi). According to reports, if you superimposed a map of Indonesia in comparison to the US, it covers the area from Eastern California to Bermuda.

One such person that has witnessed first hand the benefits of grid-connected solar power in Indonesia, albeit on a small scale, is Angele Reinders of the University of Twente. Due to Indonesia's enormous growth and rising prosperity, the demand for electricity is increasing. Solar energy provides an answer, according to the University.

Reinders oversaw a new system for PV solar energy developed on the Indonesian island of Papua.During the past two years, the UT has collaborated with the Bandung Institute of Technology (ITB), Cenderawasih University, the World Wildlife Fund and various local installers to develop the PV system on the island. Training courses on solar energy were also set up.

"Till three years ago, Indonesia had hardly any experience with solar energy systems that were connected to the grid," says Reinders in a University report published in May of this year.

The senior lecturer from the department of Design, Production and Management (Faculty of Engineering Technology) and expert in the field of solar energy saw with her own eyes how the energy supply was organized in the country. Together with UT PhD candidate Hans Veldhuis, she spent some time in the city of Jayapura.

"Due to the growing demand for capacity, the local electricity network suffers from many blackouts and noisy and polluting diesel generators dominate the street view. In remote areas of Papua, the province on the island of New Guinea where I was, diesel was flown in for generators,” explains Reinders.

“The local population sometimes used solar home systems, but these were mainly designed to supply electricity to only one household. We have now reached the point where a feed-in tariff of $0.25cents $0.30cents per generated kWh is being paid for generated solar power. This is a payment for the supply of solar power to the grid. Such an amount makes it considerably more attractive to connect such a PV system to the grid. This is due the fact that you can earn money after a payback period of about eight years: each kWh equals about 25 cents."

Enormous savings on diesel and coal

Reinders received EUR700,000 from the Netherlands Enterprise Agency to develop grid-connected PV systems in Indonesia. The programme focuses on education, knowledge transfer, networking and research. So far, the results have been very positive.

"The system produces about 50,000 kWh of electricity per year. This equals a saving of 5,000 litres of diesel and 11,000 kilos of coal per year.  The CO2 emission reduction is also gigantic, according to the head of Jayapura Environmental Agency, who was quoted in the Indonesia media, which welcomed the news of the successful project.

The concept of broader grid-based solar power projects is anticipated to grow in both established and emerging solar markets. "Whilst Europe has been at the forefront of technological developments in this area [intercountry grids], the trend is now becoming global," explains Anton Wolfsberger, Borealis Marketing Manager for Energy and Infrastructure. "The integration of renewables into the transmission system and interconnections between countries are key factors in achieving greater energy efficiency, and thus of great interest to both policymakers and the general public."