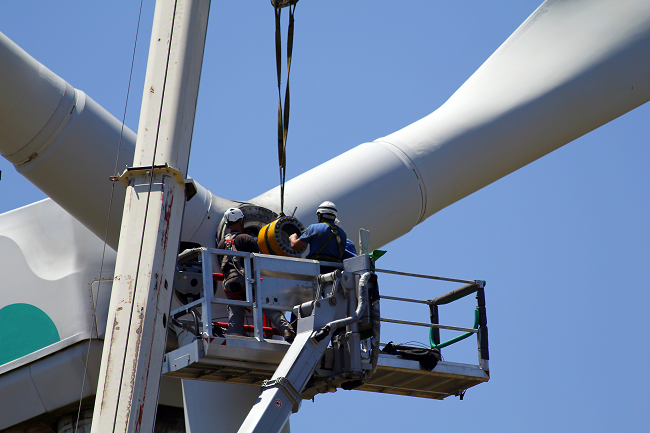 At the same time, OEM O&M costs in Europe have fallen by estimated 30% over the last five years, according to Aris Karcanias, managing director for Economic and Financial Consulting and Clean Energy Practice co-lead at FTI Consulting.

OEMs face increasing competition not just from independent service providers, but also from asset managers taking O&M in house, a move which U.S. utility Duke Energy has estimated could cut costs by up to 35%.

In addition, key subcomponent suppliers, especially gearbox and bearing vendors that are often best placed to refurbish or replace major components, are actively pursuing a piece of this market.

In some markets such as Spain and Italy, for example, retroactive cuts to subsidy regimes have also forced operators to slash O&M budgets to keep in line, Karcanias said. This has had a knock-on effect on what OEMs can charge.

Another factor affecting O&M costs is a rise in predictive maintenance techniques based on big data sets and increasingly refined sensor technology. Predictive tools can cut O&M costs by, for example, halving the number of gearbox faults in coming years.

Finally, Karcanias noted, some OEMs may have a strategic intent in pitching competitive, longer-lasting O&M contracts because it gives them greater visibility of a plant owner’s portfolio, which could help win lifetime extensions and upgrades or repowering deals.

However, according to Karcanias, while O&M costs are expected to fall further, the rate of decline is forecast to be smaller as there isn’t a high level of margin left in O&M.

Aside from these factors, the trend towards in-house O&M may slow down in the future because its benefits may not be as great as originally believed and because it is not appropriate for all asset owners.

US vs. Europe O&M

Currently, in-house O&M is much more prevalent among U.S. operators. About 80% of all asset owners in the United States carry out their own O&M compared to about 15% in Europe, according to Kelly Dallas, director of asset management at Wind Prospect Operations.

The difference is because of the dominance of a single, ‘hands-off’ OEM – GE – in the U.S. market, Dallas said. Buying most or all of turbines from a single manufacturer makes it easier to build up in-house expertise on the brand.

In Europe, meanwhile, wind portfolios have tended to be more diverse. This is changing with the growth of the offshore industry, however, where Siemens turbines accounted for 63.5% of total installed capacity in 2015, according to statistics by trade body WindEurope.

In Europe, in-house O&M is restricted to a few very large asset owners, such as DONG Energy and Vattenfall, which typically fund projects off balance sheet.

Smaller operators, on the other hand, depend on financing from lenders that tend to prefer O&M to be carried out by the turbine vendor rather than taken in house.

“For projects that are leveraged, lenders typically look for long-term arrangements covering both scheduled and unscheduled maintenance with industry-standard availability warranties being in place,” Bryars said.

The point at which it becomes more viable to bring O&M in house is usually once a portfolio reaches between 300 MW and 400 MW, according to Dallas.

Even then, however, the benefits are likely to be less than those seen at experienced asset owners such as Duke Energy, which has been performing in-house O&M for a number of years and has amassed a significant amount of learning, Dallas added.

He estimates that bringing maintenance in house may be able to deliver cost savings in the order of 20% over five years because in-house teams may still have to rely on OEMs for specific items of work, including major component replacements.

In-house teams can typically cope with between 70% and 80% of turbine faults, but may have to call on OEMs for the remainder, particularly faults requiring information from vendor supervisory control and data acquisition systems, Dallas said.

Historically, the markup on these services has been around 300% to 400%, he said. Much of this work is ultimately farmed out to third-party specialists.

The going rate for technicians at UK-based blade repair firm Altitec, for example, is typically 69 pounds ($91) an hour but the company makes a markup on top of that if it works for OEMs at the end of a project’s warranty period, said Altitec Managing Director Tom Dyffort.

However, Karcanias said that in the long run it may be counterproductive for OEMs to charge too much of a premium for routine O&M works complementing that carried out by in-house teams.

“If you’re a large utility and your turbine supplier isn’t giving you data for units you own, or isn’t quoting reasonable prices for spares, they may well be shooting themselves in the foot,” he said.